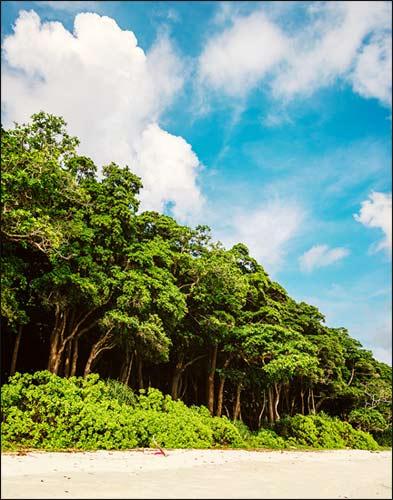 Nicobar Islands Group comprises of 22 islands, which cover an area of approximately 1841 sq km and it is separated from Andaman Islands by the Ten-Degree Channel. Car Nicobar is the headquarters of Nicobar District, about 242 km away from Port Blair.  Car Nicobar is a flat fertile Island covered with cluster of coconut palms, enchanting beaches and sea all around. The Nicobari huts, built on stilts having entrance through floor with a wooden, ladder, are unique feature of this island.
Compared to the Middle Andaman and South Andaman, Car Nicobar is a small island, with only 127 km² of land mass. There are 15 villages, the largest of which is named U-rèk-ka (also called "Malacca" by tourists), with a population of 4,314.  Malacca is a popular tourist spot.

Fifteen major villages are as follows:

*The names in brackets are often used for tourists and other outsiders, as the local names in Nicobarese are difficult for outsiders to pronounce.

Car Nicobar Island presents a landscape full with scenic and picturesque extravaganza.  The topography of the Island is hilly with lush green forests. The silvery sandy beaches on the edge of a 1900 Km of coastline are fringed with coconut palms that allure tourists from all corners of the world.  The sea around the islands offers excellent scope for water sports.

Since the soil has a high content of sand & clay, it is hindering the growth of agricultural crops in Car Nicobar. The area is more suitable for the plantation crops; and coconut and arecanut are the major products, which are grown in the area. The flora and fauna, under-water marine life and corals, crystal clear water and mangrove-lined creeks, offer an enchanting view of the nature. Adventure tourism like scuba diving, trekking, island camping, snorkeling are the prominent attractions of this place.

Car Nicobar lies 750 km (470 mi) from the epicenter of the 2004 Indian Ocean earthquake, and the ensuing tsunamis struck it with great force.  Witnesses reported the waves were as high as 30 ft (9 m) that had created a havoc.  Car Nicobar suffered tremendous damages, many lost their lives and houses.  Indian govt had made many relief programmes here such as temporary shelters, subsidize their every primary needs etc. 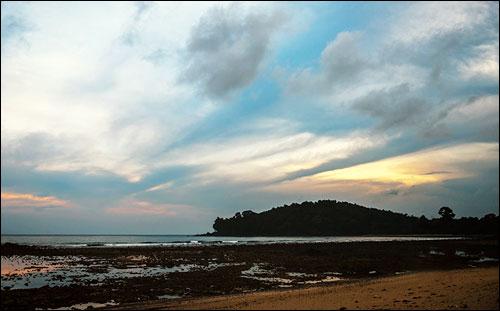 The Climate of Car Nicobar

The climate of Car Nicobar Island is tropical, as it is just 9 degree from the equator, with an annual rainfall of 400 mm. It is placed in the Torrid or hot climatic zone and totally encircled with the ocean, Bay of Bengal. So, there is no winter season but rain is a common fact throughout the year. The weather seasons of Car Nicobar can be divided in two major types, namely monsoon and summer.

Normally the summer Season continues from end of January to June. Average temperature in summer varies from 22°C to 31°C and it is the time when normally storms hit the city. Car Nicobar is under tropical monsoon climate zone with little variation in average temperature and large amounts of precipitation throughout the year.

Normally the Monsoon season of Car Nicobar continues for seven to eight months. Monsoon starts from May and continues till November. The average annual rainfall is approximately 280 cm. This island receives substantial rainfall except the months of January, February and March.