The existence of the Nicobars has been known from the time of Ptolemy onwards but the place has a long unwritten history. The inhabitants had been in touch with the outer world through the trade of Copra. However, the entry of the modern world into their lives started after the famous Vasco Di Gama voyage to India.

17th century onwards Portuguese and French missionaries tried to propagate Christianity in Nicobars. In 1756 the Danes took possession of these islands and established their head quarter on Kamorta Island, but they abandoned the same in 1848.

In 1869 the British formally took possession of these islands. In 1870 they established a panel settlement at Kamorta which was closed in 1888. The islands were included in the Chief Commissioner ship of Andaman and Nicobar Islands in 1871. This Administrative arrangement continued till the Pre-Independence period. During 1920s, the British Government appointed Mr. E. Hert as first Assistant Commissioner for Nicobars. 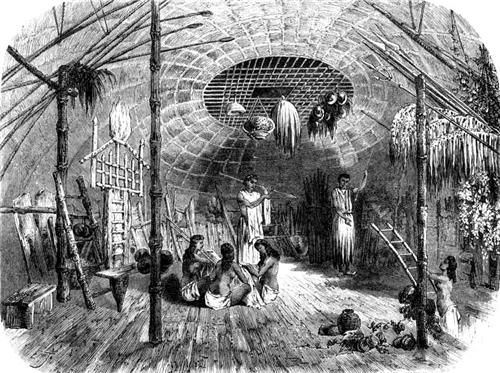 An artist's impression of the early settlers of Car Nicobar
The impact of World War II and consequent Japanese occupation of the Islands from 1942-‘45 caused a great upheaval in the mind of the locals. After a brief period of British repossession the islands achieved independence as an integral part of the Republic of India on 15th August 1947, because they have been part of the old British Empire of India. John Richardson was ordained as Bishop in 1950. He also represented the Andaman and Nicobar islands as a nominated Member of Parliament for the first time. Thus, he became a modern architect of Nicobarese society.

Soon after Independence the Government was keen to protect the interests of the Nicobarese and did not allow outside traders to exploit the people. The regulation for the Protection of Aboriginal Tribes came into force in 1956 under which entry to the Nicobar Islands was strictly restricted.

However, in the late sixties the Administration started settlement of non-tribals in this group of islands, like Adman. 330 Ex-defence personnel were settled in some de-reserved areas of Great Nicobar Island, where Panchayat System exists at present.

Some Plantation Tamils were also brought in mid 70s for engaging in rubber plantation works in Katchal Island. Owing to increase in population, 165 Car-Nicobari families were re-settled in 1973-74 to Little Andaman Island.

On 1st August, 1974, Nicobar group of islands was declared a separate district with its headquarter at Car Nicobar, where half of the population exists. Except three Panchayats and one Panchayat Samiti in Great Nicobar, rest of the District have its own local traditional Tribal Councils. 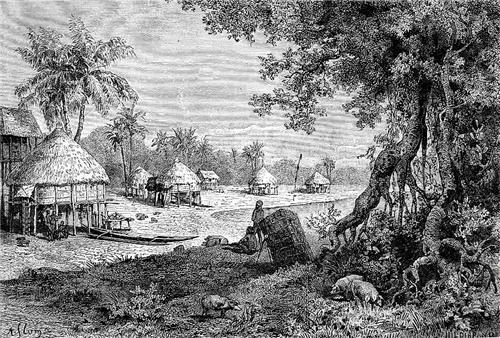 dwellings of the early settlers

Falling between the sea route from South India / Sri Lanka to South East Asia and vice-versa, the voyagers referred it as “land of the Naked” i.e. Nakkavar which is perhaps the direct Predecessor of the current name “Nicobar’. Lord Rama of great epic ‘Ramayana’ is said to have passed through the Islands during his period of exile. Somdev’s ‘Kathasaritsagar’ (11th century) indicates it as ‘Narikel Dweep’ or Coconut Island.

The islands have also been mentioned in the accounts of travelers like Fahien, (6th century); I-T’sing (early 7th century); Ptolemy (2nd century); Marco Polo (13th century) and Friar Oderic (early 14th century). The islands were known in China as Lo-Jan Kuo (land of the naked people) according to the writings of I-T’Sing.

An inscription dated (1059 AD) of the Chola King of Tanjore indicates that these islands were used as base shelter station for waging war and keeping control over South East Asia. The geographical names for the different islands have all obscure, complicated and interesting histories, whereas, each island has a native name too.

Entire village of Car Nicobar, which lies 750 km (470 mi) from the epicenter of the 2004 Indian Ocean earthquake, suffered tremendous losses in terms of life and property. Nearly half the population of Car Nicobar was wiped out.  Major damage was done to the IAF base in Car Nicobar by the huge Tsunami waves following Seismic movement off the coast of Greater Nicobar Island. The communication system in this area was completely destroyed and the only mode of communication was satellite phone.